Went with Marnie and Ayla and both girls were placed in there classes. Ayla got reserve in minor puppy bitch and Marnie got vhc in limit bitch.
Thank you to Jacqueline Hill for the photographs of Ayla. 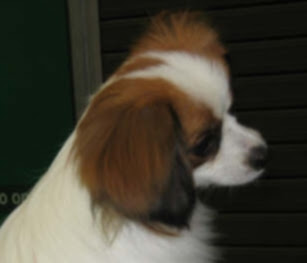 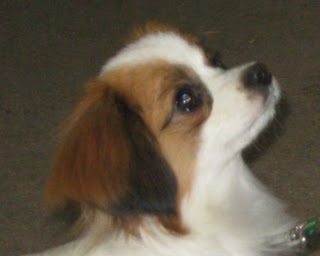 Posted by Abbeyton Papillons & Phalenes at 11:19 am No comments: Links to this post

Morven MacDonald and Newlin Zoe of Finmorlan at Crufts 2009 CONGRATULATIONS in winning 1st YKC 6 - 11 year age group Terrier and Hound and then returning on Sunday to win 1st in the National Junior Handler of the year 6 - 11 age group then being placed 3rd over all. 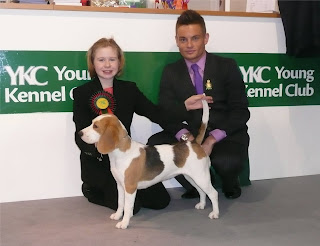 Posted by Abbeyton Papillons & Phalenes at 7:56 pm No comments: Links to this post

Went to Clydebank and District Open Show today with Indy and Ayla. Picked Anna up en route with Ruben, Carter and her wee bedding stall. Arrived in plenty of time to give the dogs a good walk and for Anna to set up her wee stall. And a busy wee stall it is most of the day, people come to look and buy and before you know it there is quite gathering at times all discussing what bedding suits what breeds and what lead Anna has made best, LOL only thing is that it can get a bit hectic for Anna to show and serve so the help offered from different people to look after her wee stall while she showed the boys was much appreciated. Carter won Papillon Jr and Ruben won Papillon Open taking Best of Breed and Group 3.

Indy was on his toes today and showed very well and came second behind Mrs MacGregor and her boy Mo. Ayla was a wee sweetheart, did everything right and even had time to give the judge a wee kiss, (sook) she was placed 3rd in a class of 8 AV Toy Minor Puppy. She was really good on the table and tried her best to keep her tail still, didn't work, jut like it didn't stop wagging while she was on the move for the judge. She didn't always keep it over her back but there were some larger dogs at the ringside and it was her first show. I was very pleased with her and how she performed. Mrs Mac very kindly took some pictures at the show and I know they are in my email inbox, will put them on the blog tomorrow. Angela and Jamie have just arrived at there hotel on a surprise visit home so off out for a couple of glasses of wine and a cuddle from my daughter.
A couple of snapshots of Indy looking quite windswept at Lanark. 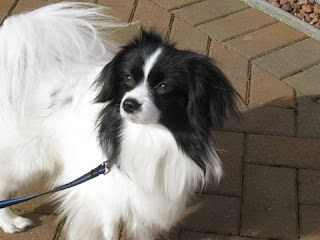 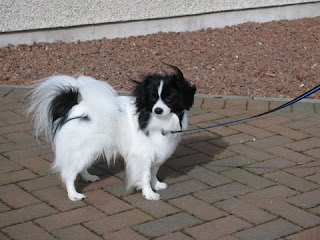 Posted by Abbeyton Papillons & Phalenes at 8:08 pm No comments: Links to this post

Well it's been and gone again and it will come back round next year again. This is the Crufts that was for us from Abbeyton.
I travelled down on the Thursday evening with Janet Kirkwood of Helydon Gundogs she was going to show her Chinese Crested on the Friday and stay over to show her gundogs on the Saturday. The trip was uneventful and smooth, thanks to some new tyres on the car, could really have done without spending the £400 but needs must. We arrived in good time for the venue opening at 7am. Only problem we parked in the wrong carpark!!!!!!! we were in the east carpark and to get to hall 5 where our rings were we had to go through Halls 1, 2, 3, and 4. Would have done some shopping then but the stall holders were still at breakfast and hadn't taken off the wraps. Left Janet at her benching and made my way to the Papillon benching and found that we were quite well placed just behind the front row within easy reach of the ring but not out in the main thoroughfare. Indy and Marnie were quite happy to get out and stretch there legs with a walk round the hall and a chance to say hello to everyone they met whether they knew them or not. Spent a wee bit of time tidying them up and then settled them back into there trolley with some biscuits and water then left them to go and say good morning to friends and other exhibitors alike. Met Jane Freeman who had just won puppy dog with Annmeeric Galaxy Traveller By Caroadori a super little Italian Greyhoud that I have met a few times now and would quite happily smuggle him away in with my dogs if I thought Jane would let me. LOL He didn't get any further awards but his kennel mates were placed 2nd in special jr dog and 3rd in open dog. Also dropped by the Maltese ring and watched Lafford Marc My Words From Zumarnik gain her CH. title winning her 3rd CC today.

Any way back to Papillons and we had a change of judge, Jimmy Simpson (Penang) was unable to be there due to ill health and the replacement judge was Jean Banfield (Kingshaven). Indy was first in the ring, he was really good on the table and moving (went a dream actually) but at the end when the judge came round for her last look before placing, Indy dropped his tail I just wasn't quick enough to get him back on his toes so we missed out. Marnie on the other hand was doing her usual, flying round the ring and trying to say hello to everyone at the same time. She actually spotted Anna from a fair distance and I thought that was it, but she turned her attention back to what she was doing and was placed a very respectable 2nd in her class. Alfie (Abbeyton What's It All About) was there today as well and got placed 3rd in a very strong class of dogs. Wills and Cosmo went unplaced, but if you had been there to see the very high standard of the dogs being shown there was no shame in not having a placing.
After leaving Crufts I drove the 100 miles or so to Angela's where we were spending the night. Indy had a great time playing with Nacho and was quite happy to share his treats and dinner with him. 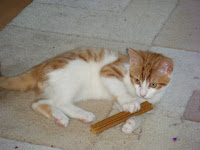 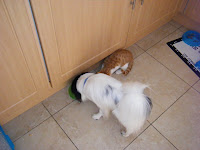 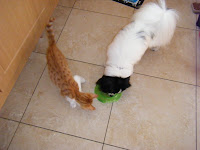 Saturday morning we went for a walk and Indy was offered a new home with a lady he impressed at the bus stop by lying down quietly while we chatted. Angela is always impressed when I come back in and can tell her things from around her town. Found out this time that is costs £1.70 on the local bus to the nearest town. LOL
Posted by Abbeyton Papillons & Phalenes at 1:22 pm No comments: Links to this post

I was all ready to post about our trip to Crufts this year but I had a phone call today which put it in the shade, telling me that Becky died 9th March 2009 after being involved in a car accident. Her owner Liz is absolutely devastated. Both Becky and her buddy Gizmo jumped in the car with Liz to go a short trip, the car was hit by another and Liz is left very badly bruised and Becky hurt her back. She was taken to her vet and referred immediately to the Glasgow vet school where they operated but found her spine was so severely damaged that the decision was taken to not to let her suffer any further. 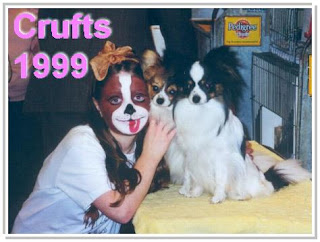 Becky (tri) pictured with her litter sister Belle and Angela at there first Crufts where Becks was placed a very respectable 4th in Puppy bitch. Becky on the occasions she was shown did very well, I stopped showing her after she was attacked by two dogs at a show. She was a very important dog in that she is the foundation to most of the dogs I have.

Posted by Abbeyton Papillons & Phalenes at 12:23 pm No comments: Links to this post

That caught your eye didn't it? LOL it's going to be a long one so settle down with your favourite tipple and we will begin....
I was the show manager at a local open show and thankfully the day passed without any problems. The edge was taken off the day for me because I had to disappoint a friend by not being able to drive with her to Heathrow to collect a dog coming in from the USA Friday morning. As we set the rings etc up on the Friday night I wouldn't have been there in time. I really did try to get away from doing the set up as I would still have been at the show on the Saturday, but after making a few phone calls I was told this was not the case, I had to be there on Friday evening as the buck stopped with me and if anything went wrong it was my responsibility. Didn't make any difference that it was my first time as show manager and that there were two other committee members with years of experience at the job there as well, my name was on the schedule and I could face a fine if I didn't fulfil my role. So take note that being on a committee really does mean commitment or you could face paying for the privilege. Never mind the hours you give up of your free time to support your "hobby" or the donations you make be it via raffles, prizes or monetary donation to the clubs.
Anyway that was Saturday and for me Sunday couldn't come round quick enough. Went to Catrine show at Lanark and had an ok day, both Indy and Marnie were placed second in there classes. Beginning to think I should maybe give up breeding and showing my own and just continue to show other peoples dogs as I seem to be doing better there at the moment. I handled an English Bull Terrier and won 1st and best of breed. Nipped away for a while to meet up with Sue Deamer and have a chat, Sue was kind enough to collect a satnav for me that I had ordered online from Halfords so I don't have any excuses for getting lost. Well except for the NEC car parks, what a horrible place to get in and out of. Well it is for me. LOL
The intervening week has been taken up with girls in season, poor Indy doesn't know if he is coming or going. As for the girls, any opportunity and they are flirting like mad with him behind bars.
We had no shows this weekend but that doesn't mean I stayed at home. Saturday I went to a Secretaries Seminar organised and run by SKC and very informative it was too. Gave a good insight to the job the secretary of General and Breed clubs have. Met Terry Heath of Holloville Bull Terriers and we had a very long but interesting conversation about health issues in Bullys and dogs in general. Sunday was at an easier pace and didn't leave home till 1pm to take Jean to the Maltese Club of Scotland AGM.
Was going to say The End but that's not true come back for more and I'll promise I will get pictures for you next time. We are showing at Crufts on the 5th March. taking Indy and Marnie so do check what happens there.
Posted by Abbeyton Papillons & Phalenes at 10:10 am 3 comments: Links to this post