TIME TO CATCH UP

With what's been happening at Abbeyton Papillons.

I was delighted to step in as replacement judge at the Papillon Club of Scotland open show on 4th March 2007. Due to ill health the scheduled judge was unable to attend.
Best in Show was Bankshill Isle of Lewis ShCM and Best Puppy in Show Cadogan Ringleader. Well done to both of them I would have happily taken either of them home. See the full results and pictures at http://scotpapnews.blogspot.com/ March Archives.

Marnie (Abbeyton Some Like It Hot) has continued with her winning ways having many firsts at open shows and continuing to be well placed at championship shows. At Crufts our change of Judge was Mr David Roe (Sunshoo) Marnie from a large Special Puppy class won 3rd.

Summer (Abbeyton Summer Sun) had two dog pups on 17th January 2007 they are called Magic (Abbeyton Moon Magic) and Shadow (Abbeyton Moonlight Shadow). Magic has made himself quite at home with his new owner Liz and her other Papillons at Northlyte.
Shadow continues to keep everyone here on there toes and moving around. Humans are liable to have there toes bitten if you kick off your slippers and the other dogs are losing the fringing from there ears and tails in the chases round the garden.
Posted by Abbeyton Papillons & Phalenes at 3:01 pm 1 comment:

Summer with pups Magic and Shadow 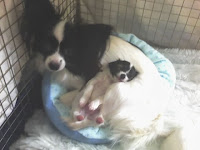 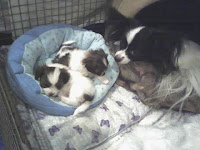 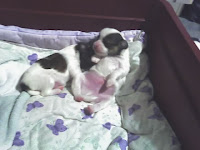 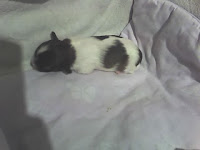 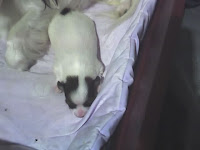 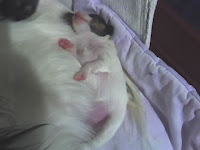