Shadow steps into the limelight

The day after Shadow did his little walk about I phoned the vet and arranged to have him microchiped (ouch) I prefer to have my dogs done about 1 year old but I thought if Shadow has a bit of the wanderer in him I would rather be safe than sorry (though a few weeks later I did wonder if I did the right thing).

Well we went to Shadows first show (and a championship show at that) East of England at Peterborough our judge was Irene McManus (Metexa).
Having travelled down with Anna Fraser (Bonmeshay) and Joe Cassidy who owns Abbeyton What's It All About we arrived in good time to let the dogs stretch there legs and have a good walk before show time.

Shadow was entered in the Minor Puppy Dog class and was six months on the day. Being in among so many other dogs didn't seem to phase Shadow in any way and he just got on with his day. In the ring he was quite happy to show himself off to all and sundry provided they didn't try and touch him, he backed away and dropped his tail and could only be encouraged with some food to approach other people. Little did I know that when he went on the table for the judge his first thought was of the vet and being microchiped! As soon as the judge approached him he went rigid and when she went to go over him he let us both know with a little bit of vocals that he did not want to be touched, after a few moments he settled enough for the judge to see him and was placed 4th in the class. I was so upset at his behaviour, it was just difficult to believe that such a little charmer at home could become this not so nice puppy.
It was only later in the day when speaking to others that I realised having him microchiped a few weeks before the show was not a good idea. Shadow thought that the judge was going to hurt him and reacted accordingly.

Shadow's next outing was to Leeds championship show where his behaviour was so much better but still not 100% on the table. The judge Jean Grant (Gransil) was very patient with him and awarded him 1st place in Minor Puppy Dog. 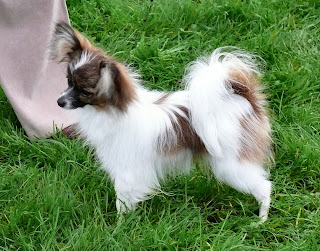 Ever the optimist we went to a local open show and Shadow had a little set back and again showed his dislike of being handled by a stranger. Isn't it nice that judges can be so kind and forgiving of a little pups hang ups. Breed judge Amanda Skelton gave Shadow 1st in Papillon Puppy. In the Any Variety Minor Puppy class Shadow was again placed 1st, the judge was Angela Skelton (Adnamashan) and she was especially good with Shadow even taking a moment to give him a cuddle reassuring him that not everyone was going to hurt him. Shadow then won Puppy group 2 which I was very pleased with.

Having joined a not so local training class especially for toy/small breeds of dog I travelled an 80 mile round trip to have some help in retraining Shadow on the table. One of the pluses at this club is that the baby puppies get to play and chase each other round the hall for first half hour before putting their leads on for ringcraft training. With the help of trainers Astrid Ogilvie and Kaye McDowall Shadow is doing well and thanks also to the members who happily let Shadow have some of there dogs treats as a reward for going to say hello.