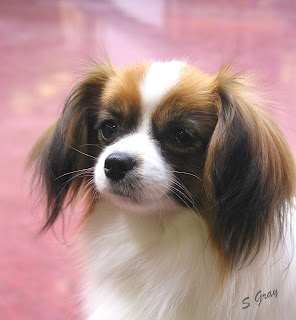 Travelled with Anna Fraser (Bonmeshay) down south to the N & E Papillon Clubs Championship Show. I had Blaze and Ayla with me and Anna had Fie. It was the clubs 25th Champ show and they celebarted in style with beautiful rosesttes, a gorgeous cake and gifts and prizes galore for exhibitors and members alike.

First in the ring for Minor Puppy dog was Blaze (Abbeyton Trail Blazer) and I was so pleased with him, quite a big show for a puppy out first time and he behaved and showed so well. He was placed 2nd in his class qualifying him for Crufts 2011.
Next one was Anna's girl Fie in Junior Bitch and it was quite a big class. Fie is getting more and more confidence with each show she goes to and though she went unplaced she showed herself well and seemed to enjoy being in the ring this time round.
Ayla was in Post Graduate bitch and was unplaced in a class of 6. Judges comments on the table were all to do with how she did like Phalenes but preferred them with more fringing. Anyone with a red will know that what you wish for in a 2 year old and what you get are two different things. Ayla was then shown in the Special Phalene Open Bitch class in which she got 1st. Saying I was surprised is putting it mildly as after the judges comments about fringing she then placed Ayla above a class of bitches all with good fringing. Can only assume the judge thought this time aroud that fringing wasn't an issue.
Blaze was back in the ring for Special Phalene Open Dog and was the baby of the bunch, again he went very well and was placed 2nd in the class.
The only mar on the day was at the very end of the day. There was a Special Best Phalene in Show rosette to be awarded and I asked the secretary as it wasn't in the schedule or catalogue which Phalene's were eligible to compete for the award, he stated that as it was a special award it would be the winners of the Special Phalene classes. Two other Phalenes that were shown in other classes came into the ring to compete and when the judges and steward enquired of the secretary what was to happen he changed the goalposts and allowed them to compete. Not a case of sour grapes as I knew Ayla would quite possibly stood reserve to Bertie the winner of the Phalene dog class but it was the fact that the secretary changed the rules to suit.
Anyway we had a fantastic day meeting friends and chatting. It was made even better by the fact we were staying over and I didn't have to drive home that night. Found a fantastic carvery and enjoyed a very nice dinner. As Anna said "hunger is good kitchen" and the dogs even got some as well. 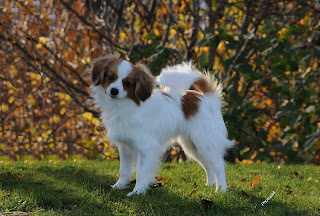 Jim (centre lol) with King and Kaiser and Meg the Collie 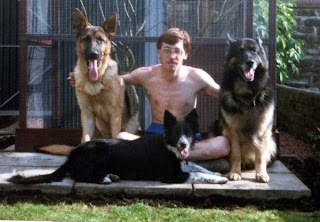 Was having a look through some old photos and came across this one of my Mum with myself and my four sisters at Barbara's wedding. 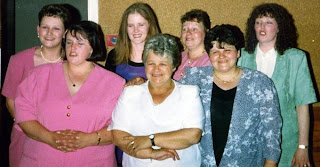