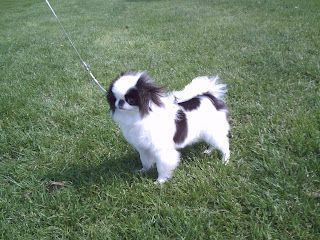 Was up bright and early today and decided to drive the five miles to our local show.
Marnie and Flame were none the worse for wear after there trip to Malvern so I decided to take them with me.
Marnie was placed 1st in Papillon Post Graduate and Flame was 2nd in Papillon Open. Best of Breed and Toy Group 4 was won by Marnie.
While we were at the show Carroll Montgomery (Carrollryan) came along to watch and I managed to get a photo of her cuddling Flame (she is not very photo genic) 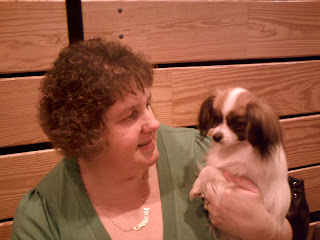 Left home on Thursday morning and met up with Liz Anderson (Northlyte) to travel to the WELKS championship show in Malvern.
Arrived safely 7 hours later, after having done a few U turns while trying to find our bed and breakfast accomondation. Once we got there we were more than pleased, beautiful house and fantastic gardens for the dogs to run in, with plenty of rabbits and pigeons for the dogs to chase.
There was a Malvern water spout at the top of the drive so plenty of fresh water straight from the hills to keep the dogs cool. We were part way up the side of a hill and the views over Malvern were breathtaking.

The weather was really nice, sunny but with a slight breeze. Judge Caroline Lee-Farnsworth decided to judge indoors. Liz had two of her new puppies with her, Duncan (Northlyte Classic Star) he was placed 3rd in Minor Puppy Dog and Fern (Northlyte Mists of Time) who got VHC in Puppy Bitch.

Marnie was great in the ring, she is really enjoying showing just now. She got 2nd in Junior Bitch, the bitch that was in front got the Reserve Bitch CC. Flame was really good, her head was up watching everything and she carried her tail so much more confidently than she has been. She won a very well deserved 3rd in Limit Bitch which qualifies her for Crufts 2008.

We left Malvern about 4pm and I arrived home at 11.30 absolutely shattered. But what a great time we had, everyone (well nearly all) round the ringside were in good spirits with a lot of laughter and friendly chat going on. Even the judge joined in with some friendly banter.
Posted by Abbeyton Papillons & Phalenes at 6:00 am No comments:

Anna (see BONMESHAY) and I went to Perth today with Marnie, Flame and her boy Ruben (Northlyte Timeless).

Ruben won 1st Papillon Graduate and Marnie took 3rd place. Flame was 2nd in Papillon Open bitch, the judge commented straight off that she knew she was a Phalene.
Ruben went on to win 1st AV Toy Puppy, but as we were unable to stay for the end of the show he did not compete for best puppy in show. You can see his picture by clicking on the following link. RUBEN
Posted by Abbeyton Papillons & Phalenes at 8:00 pm No comments:

Took Marnie and Flame to a local open show and had a very nice day. Marnie won first in Papillon Graduate, she was her usual self full of confidence and loving the attention from the ringside. This being only Flames third show since she came to live with us I was delighted when she came second in Papillon Open.

After we were finished showing I had the pleasure in showing Henry (Mossdown Henry Cooper)the Pug, his mum Joyce being on the committee she is unable to handle dogs at the show so this is one of the occassions that Henry and I get to have a bit of fun in the ring. We were very pleased to be able to give Joyce rosettes for first in Pug Open, Pug Best of Breed and Toy Group 3. Judge Mr Michael Boulcott 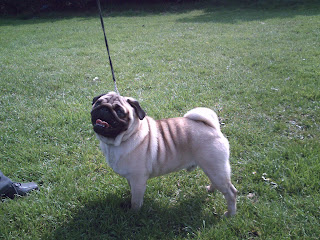 Travelled with Fiona MacDonald and her daughter Morven to the Hound Association of Scotland Champ show in Kelso. Fiona was showing her two Beagles, Fusion who got third in Graduate and Dylan who got second in Post Graduate. Well done boys.

My day was taken up stewarding in the Afghan Hound ring with fellow steward Ann McManus and judge Marita Rogers. There was a good entry of 126 dogs to which the judge gave her full attention. The weather was really good if not a little to hot for some of the dogs.

I also enjoyed chatting with exhibitors and catching up with friends in the Hound Group that you usually only see in the distance at other General Champ and Open shows. Always so much easier when you don't have dogs with you at the show.

With Marnie and Flame to bathe for there show the next day there wasn't much time for tea when I arrived home at 8pm.
Posted by Abbeyton Papillons & Phalenes at 10:47 pm No comments:

Out of the shadow 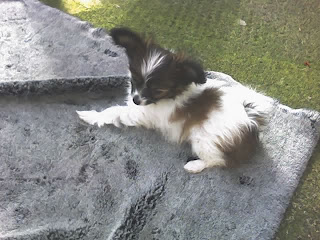 ABBEYTON MOONLIGHT SHADOW
enjoying being in the garden on a sunny day
Posted by Abbeyton Papillons & Phalenes at 5:00 pm 2 comments: 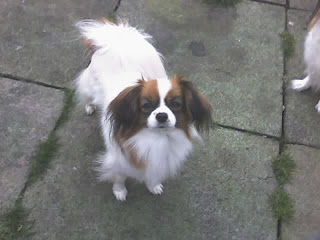 Northlyte Fire 'n Brimstone
who has come to stay with us and keep Marnie company at the shows. An absolute delight to have around the house with her very typical Papillon nature. Flame is a Phalene and one of the few being shown in the UK. Not always recognised some people (judges included) think they are soft eared Papillons and place them down the line or not at all.
Posted by Abbeyton Papillons & Phalenes at 4:51 pm 1 comment: