Went to the vets this morning with Amber, Hugo and Marco to have there first puppy vaccinations done. A necessary evil, I hate to hear them cry and I am always a wee bit wary when there is a smaller pup involved. Hugo weighed in at 1.95kilo and Marco was 2kilo little Amber didn't make it over the kilo weighing in at just 0.85kilo. I suppose I could have waited a while longer for Amber to have hers done, but now that I have started going out to the shows again I would hate for my pups to become ill because I had brought something back into them and it was preventable.
As is usual there is always someone who doesn't quite take to travelling, and guess who it was this time? Yep just had to be HUGO no throwing up just the constant drool, just like his older sister Marnie who also suffered in this way. Actually it got so bad she travelled to most of her shows on Anna's knee wearing a bib and wrapped in a towel, with a spare one just to soak up the fluid. It almost got to the point where I actually considered not taking her on a few occasion's and sometimes when we did get to the show she would be so wet that I couldn't take her in the ring for judging. We tried everything, from DAP spray, travel tablets to ginger and a few others as well. The last few shows she has gone to she has been really good, so maybe it is something they grow out of. Fingers crossed.
Posted by Abbeyton Papillons & Phalenes at 10:51 am No comments:

Where does time go? 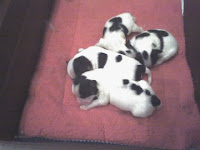 It only seems like a few weeks since Flame and Ziggy had there pups.

Flame's pup Amber (Abbeyton Flaming Star) will stay with us and will hopefully make her appearance in the show ring round about June time all being well.
Ziggy's pups have all got new homes and again all being well we will see them in the ring in June. Hugo (Abbeyton Runnin Free) will stay here with us, Marco (Abbeyton Here We Go Again) is going to live with Catriona and Craig in Dumfries and will be there first dog for showing. Lucy (Abbeyton Here's Lucy) will live with her older brother Wills (Abbeyton I'll B Willin T Tri at Bankshill), her sire Lewis (Bankshill Isle of Lewis) and of course Sue. Lilly (Abbeyton Runnin Wild) has gone to live with Estelle (Kirkchase) and has so far made herself right at home.

Thoughts of sitting down and putting my feet up for a wee rest when they have all gone did fleetingly pass through my mind, but with Indy going to training classes and Amber and Hugo soon to join him I have a feeling that my feet will be kept firmly planted on the ground .
Posted by Abbeyton Papillons & Phalenes at 5:28 pm No comments: 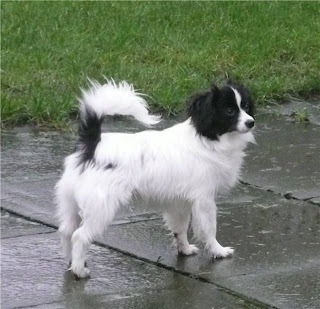 (INDY 6mths)
SERENGLADE INDIGO MOON
Indy attended a local open show on Sunday and went 1st in Papillon Jr. Though he enjoyed being at the show and loved being with the other dogs, when it came to going in the ring he was a little anxious and this makes him carry his ears to the back of his head giving the impression of no ears. On the table and moving afterwards he was a bit more settled which gave the judge the opportunity to see the correct placement of the Phalene ear. For me I was just pleased that he enjoyed the experience and I will continue to take him to the local shows to build on that.
Posted by Abbeyton Papillons & Phalenes at 8:00 am No comments: 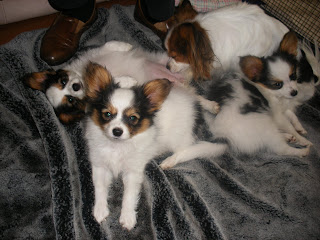 MARCO (as rarely seen SLEEPING!!!!)
ABBEYTON HERE WE GO AGAIN
(Bankshill Isle of Lewis x Abbeyton With A Touch Of Gold)
After many sleepless nights I have made my decision as to which dog pup is to stay here with us and who is going to a new family. Hugo is going to stay with us and Marco is ready for his new home. Unfortunately the pet / show home that we had planned for is not able to take Marco. But we will keep you up to date with our progress in finding the right people for him. 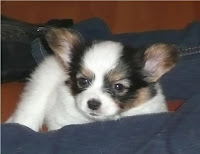 HUGO
ABBEYTON RUNNIN FREE
Who will remain with us at Abbeyton and will soon be able to go out into the world and meet all our friends taking his best friend Amber with him. 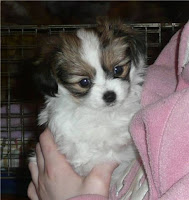 Who would have thought that such a small pup could have made so much difference!!! The house has never been so quiet, not saying that she was noisy or anything but she certainly made her presence felt.
Lilly went to start her new life with her new Mum and Dad and lots of other dog friends. She will fit in no problem, cause that is just the kind of dog she is. Tackle anything head on and think about it later. Within 5 mins of arriving home she met a lot of new peolpe and had her first sight of a cat or should I say cats as there are two. Next was the Papillons and this was done in stages so as not to frighten Lilly. She was introduced to her mentor and guardian Holly who will make sure the others aren't to rough with her.
Posted by Abbeyton Papillons & Phalenes at 7:38 pm No comments:

I've given up!!!! What a little bunch of timewasters I have.

So much time is spent watching them chasing each other out into the back garden, that is everyone except Amber, who being the lady of the bunch she neither rushes nor chases unless of course Ziggy should stand still on the floor for more than a minute or two then like a guided missile all pretences of being the shy, demure little lady vanishes and its a free for all where she quite happily pushes her way in with the others for a quick drink before being told by Ziggy just where to sling there hooks. And all through this Flame sits quietly on the back of the couch with a smug look on her face that says I just don't do that kind of thing anymore. Now we know where madam Amber gets the attitude from.

Ziggy's gang of four are out and out born trouble makers. Lilly is a real shining light, in the last week she has started taking great pleasure in waking us up in the middle of the night to go outside and do her toilet, no amout of treats or gentle persuassion will make her go on the paper in the puppy pen. She was first to go and explore the garden and will sit at the door and cry if the door is closed and she can't get out, she will quite happily go off exploring come rain, hail, sunshine and even snow. I'm quite sure when she goes to her new home there will be plenty of fun and games in taming this Runnin Wild one.

Here's Lucy who just loves to be pampered, kisses and cuddles are given freely and as often as she can get to you. Her favourite things in life at the moment is always first and foremost DINNER oh wow does she love her food, and then people, the more of both the better as far as Lucy is concerened. Another explorer of the garden she quite often makes it her mission to bring in the biggest twig or one of those itsy bitsy stones that you don't see till you stand on it with your stocking feet, ouch!!!!!!
Now to the boys. What a quandry I'm in over them. Who to choose? With two such nice puppies and not a lot to choose from between them I am not quite bald, but boy am I getting there.

Marco is just so mischevious, tough and afraid of nothing, even the dog who lives next door when she runs up the shared drive doesn't make him blink an eye, he stands his ground and you can almost see him daring her to try and come close to the gate, he has his litter mates hiding behind him giving him no support at all. LOL

Hugo Ah ain't he another cutie? He loves to sit in front of you and voice his opinion of the world as he knows it. Which isn't any further than the back garden, of which he was the last to set foot out in to that big wide space and only after he had spent many days sitting on the step contemplating just what everyone else got from being out in the wet and cold. This boy is a little more thoughtful and is certainly not the fool who rushes in. Whatever life may hold for him, I just know that it will be taken at his pace and we will just have to learn from him.
The time approaches for the pups new Humans to come and see them and eventually take them home. It will be nice to see them settled and loving new people, finding new things to test there teeth on and training there new humans to there way of doing things.
Posted by Abbeyton Papillons & Phalenes at 9:34 pm 2 comments:

I have a name 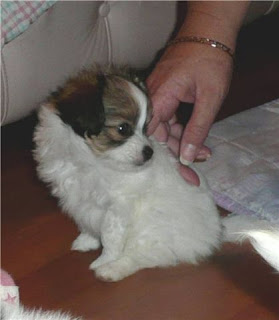 Flames daughter gets a name
"AMBER"
Posted by Abbeyton Papillons & Phalenes at 12:00 pm No comments: 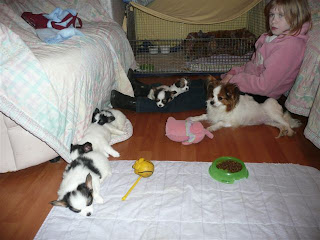 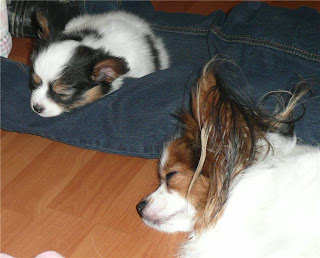