Indy was entered at this show and it's one of those days where you wonder why you bother.
Between folk who say that they don't like Phalene's (but have nothing against them????) telling you and anyone else who would listen about how they don't fit the standard in the UK (in there opinion I must add), and then a judge that asks if you are "showing him as a Phalene??" when he is so obviously Phalene and not Papillon. I'm just glad there were some good friends there to make the day worth the travel.
I have to say I did like the CC winners, a very nice feminine Papillon from Scotland and a rather smart Phalene from the USA.
Posted by Abbeyton Papillons & Phalenes at 2:59 pm No comments:

The Papillon (Butterfly Dog) Club of Scotland held its Champ show on Saturday 22nd May at Lanark, the judge was Liz Anderson (Northlyte) and a very good entry of dogs she had.
Unfortunately I didn't arrive at the show until 1.30pm due to Marnie having her pups so Indy missed his classes. Daisy however was placed 4th in Jr bitch and won 1st in Phalene bitch. She came home with a very nice Plaque donated by Ann and John Cooper (Ancojo) a hand towel beautifully embroidered with a Phalene head presented by the judge and then of course the bag of food courtesy of the sponsorship by Royal Canin.
All exhibitors who entered were presented with a crystal drop engraved with a Papillon and very nice they were too. People who hadn't entered having seen them are now asking if they can buy one, alas no as there were only enough made to cover the entry at the show. We also had a raffle for a 19" all singing all dancing TV, and club favourite (because he works so hard) 6 year old Kyle Davidson was invited to draw out the ticket and no one could believe it when he drew out his Dads ticket as the winner. Kyle went home very pleased with himself as he now has a TV all to himself in his bedroom.
We got home thoroughly exhausted, but had no time to stop as I had to see to Flame and her pups and check that Marnie and her new babies were all doing well. The other dogs were happy to wait for tea as they were quite excited by the new smells and sounds. Would love to say that we all went to sleep early but it never quite turns out that way LOL finally got to bed around midnight.
Posted by Abbeyton Papillons & Phalenes at 2:29 pm No comments:

Marine kept us on edge all of Friday night waiting for the arrival of her pups. But due to a difficult presentation of a pup we rushed off to the vet Saturday morning where we were very fortunate that Shona the vet and Jennifer the nurse were able to section Marnie and deliver her puppies live. Both pups a boy and a girl are doing super and Marnie took it all in her stride. 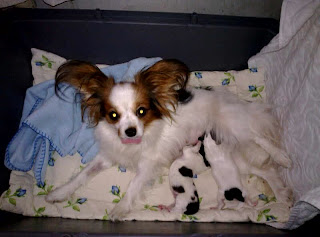 Marnie and her pups
Posted by Abbeyton Papillons & Phalenes at 1:33 pm No comments:

Flames babies start as they mean to go on. 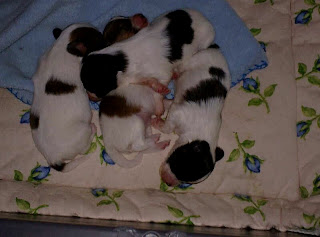 Life is hard!!!!! LOL having Mum cater to your every whim and two humans that go gaga with every whimper and cuddle you at every opportunity.
Posted by Abbeyton Papillons & Phalenes at 2:37 pm No comments: 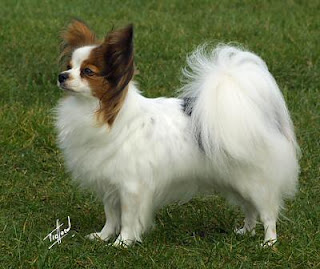 ABBEYTON WITH A TOUCH OF GOLD
18-04-2002 to 06-05-2010
My girl Ziggy was in the back garden watching her Dad (human one that is) weeding etc, she had taken up her usual position to catch the warmth of the sun on her back and she lay down and went to sleep. Ziggy has suffered from colitis since the day she was born and it wasn't unusual for her to have a dicky stomach. This time it was different and she was vomiting blood as well. Her vet was treating her for an ulcer along with the colitis, but now we know there has been something else lurking there as yet unfound. For everything my vets and there staff have done for Ziggy throughout her 8 short years with me I will always be grateful. Ziggy's ashes will be placed in the garden beside our other dogs that we still miss so much. 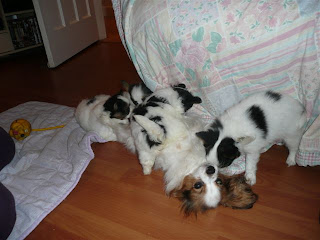 My favourite snap shot of Ziggy being a Mum.
Posted by Abbeyton Papillons & Phalenes at 9:38 am 2 comments: 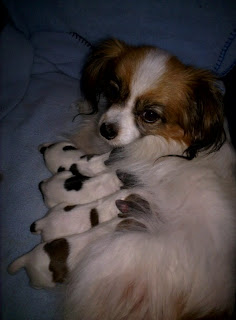 A contented Flame with her new borns, 2 dogs red & white, 1 black & white dog and 1 black & white bitch. Pups are all well and getting on with growing, Mum Flame is brilliant she doesn't mind at all when we pick up the pups in fact she seems quite happy to show them off. Indy of course as the Dad has no input whatsoever other than standing outside the room door with the other dogs trying to get in to see what is going on.
Posted by Abbeyton Papillons & Phalenes at 8:30 am 2 comments: