Fisrt up is Ruairidh (Pronounced ROO-uh-ree) and is a male Gaelic/Celtic name which means 'Famous Ruler' or 'Red King'. 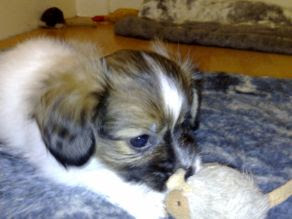 Next is Ayla named after a beautiful Papillon from my first ever litter. 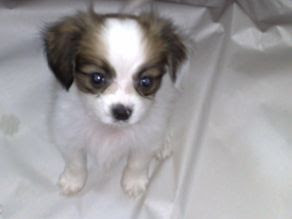 Here we have Betsy who has come by her name from who knows where. 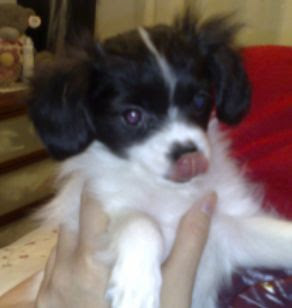 Then we have MacKenzie who has decided to make our job even harder in the choosing by being so loveable but is he or isn't he a Phalene. 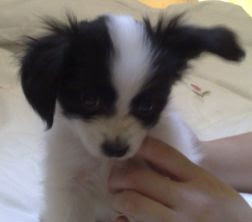 Hugo and his new family 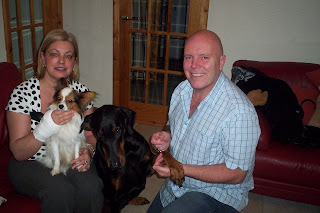 Hugo's neighbour and playmate Eva lives with Stuart and Gillian who
will probably have Hugo to visit as often as Eva visits Margaret and Ian. 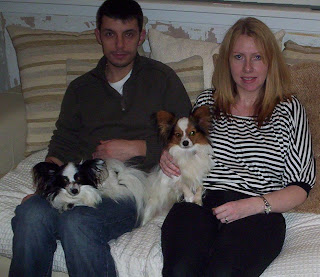 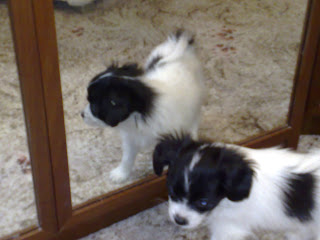 Maybe if she looks back quick the other one might be gone???????
Posted by Abbeyton Papillons & Phalenes at 3:26 pm No comments: 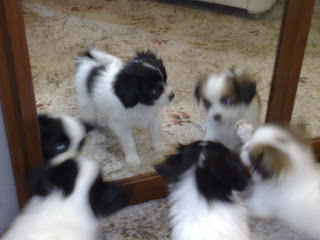 Not a great photo, but it raised a smile here watching the pups try and discover who lived behind the mirror!!!!!
Posted by Abbeyton Papillons & Phalenes at 2:38 pm 2 comments:

What a difference a day makes

Saturday:-
My weekend started late, Jean who I was travelling with to Steward at Catrine Canine open show slept in!!!!! (if only I had know I would have tried for an extra five minutes myself). We arrived as the judge was placing her first class of the day the AV Veteran. I introduced myself to the judge (sorry she didn't return the courtesy so don't know who she was). My only comment on the day is that time passed very slowly for both myself and exhibitors, and having to steward for a judge who didn't seem to grasp the concept of having a Special Best Puppy as opposed to Best puppy in show competition made the day even more entertaining especially when in the middle of judging a class she decided to give me her opinion of a dog. Boy was she embarrassed to discover at Lunch that I bred the dog she had been criticising. One of those days where you are quite happy for it to end and get home.
Sunday:-

Left the house at the crack of dawn to go to the Scottish Toydog Society and had an absolutely fantastic day. The venue was full to overflowing with an atmosphere that left everyone relaxed and happy. My job for the first part of the day is always selling the raffle tickets, which gives me the opportunity to catch up with everyone and ask how they are enjoying the show and any comments they may have about the running/organisation of it. Hate to boast but the only complaint was in truth lack of space. But when you think of the equipment people now take to a show for themselves and there dogs it fair adds up to quite a size able amount of stuff. Everyone involved in the kitchen be it cooking, serving or supplying food should take a very big and well earned pat on the back, as this was the hub of all things tasty and well worth the money. People were taking time out to sit and relax away from the ringside and have a chat and enjoy all the home cooking, from Anna's very tasty Stovies and Cottage pie to Frances's Strawberry Tarts, that almost caused a riot over who could get to the counter first and have one. LOL I took a turn in the kitchen doing teas and coffees, afraid this is as far as my skills go in that department, but maybe I'll get better. I had three dogs entered but decided not to take all of them, Marnie was the only one to come and after having to leave her for extended periods of time I have now decided that for as long as I am on the committee I won't enter anymore dogs at the show as it is too much to look after them and attend to the duties of helping at the show. Such a shame as it is a toydog show and the turnout of Papillons is usually very good.

Anyway I have never been so glad to get home kick off my shoes and sit down and relax with my dogs and have pups biting my toes. Bliss. LOL

The Dog In Art

A Starving Dog is Not Art Petition - Sign here
Posted by Abbeyton Papillons & Phalenes at 10:24 am No comments:

Breakfast goes down a treat 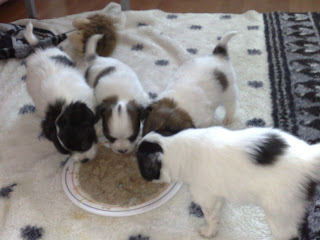 Flame's pups at 4 weeks old and not a care in the world.
Posted by Abbeyton Papillons & Phalenes at 9:22 am No comments:

After some recent discussions about Papillon colours different people have different opinions as to what is the correct description for the following dogs colours. There are two litters from this mating. 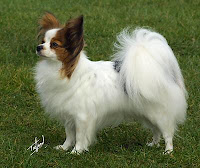 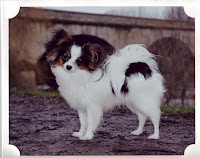 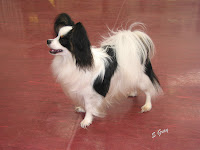 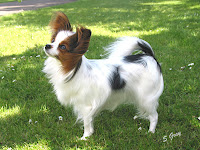 Litter 2 Hugo, Cosmo, Lucy and Lilly (not in picture) 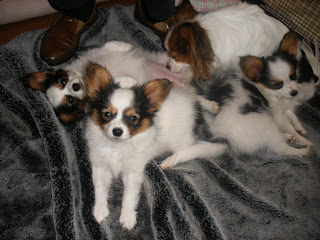 No we haven't gone totally over to the birds LOL

Been to a couple of shows where Hugo qualified for Crufts and Indy yet again impressed the ringside with his very obvious attraction to the ladies on full view. Did start to get a little worried about this as he seems to be in a permanent state of excitement. Had a dog once who underwent surgery for something similar and I wouldn't want to go there again, but glad to say that it appears to be a hormonal thing with him.

Everyone has been enjoying the laid back relaxed life over the last few months. Marnie was mated on her last season but I think we went to early with her and she missed. Flame was mated to Indy and you can see from the pictures below we had four lovely puppies, 2 boys and 2 girls. Flame is being a great mum to them and boy does this make my job easy. Fingers crossed that we have at least one if not four Phalene pups. 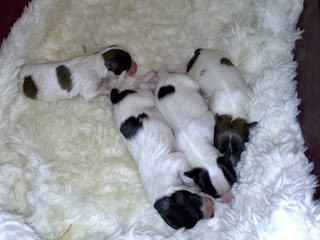