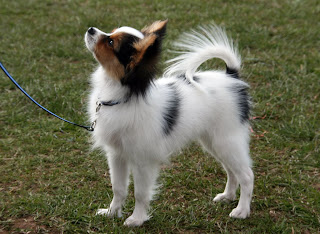 ABBEYTON RUNNIN FREE
This is my new puppy Hugo at 4 months old. He joined Marnie and Indy at a local exemption show for a day out which he seemed to enjoy. Thanks to Janetta Fairbairn for the above picture she got him just at the right moment.
Hugo will travel with Marnie to his first show at Border Union Championship show and meet up with his litter sister Lily (Abbeyton Runnin Wild at Kirkchase) and his brother Cosmo (Abbeyton Here We Go Again). This is Cosmo's mum Catriona's first time exhibiting at a dog show. Good luck Catriona I hope you enjoy your day.
Hugo, Marnie and I will be staying over on Saturday night with Anna in her new caravan, from what I have heard there is to be wedding that day and everyone will be helping celebrate. Now I know why there was a buzz about going to Border Union this year and aren't we all looking forward to it. Will try and get some pictures etc and let you all know how it goes.
Posted by Abbeyton Papillons & Phalenes at 9:13 am 1 comment:

Kept looking at the blog and thought that it needed updating, but a bit like housework it can seem a shame to be sat at the computer when the sun is shining.
First I would like to say well done to all of you who have been doing well and to those who (like we all do at times) kept the majority company in leaving the ring, oh well there is always the next one. LOL
We have been to a few shows but not as many as usual, Marnie was at SKC in May and won 1st in Post Graduate bitch. I had entered a few more dogs for the Scottish Papillon Club show the following day so getting home and bathing the other dogs was a must.
My daughter Angela came to the show to help me and had the pleasure in taking Domino (Abbeyton Silver Rain) into his first and last veteran class. Angela showed Domino and got VHC, he hasn't been shown for a few years and to be truthful I think he prefers to be at home on the couch.
Indy (Serenglade Indigo Moon at Abbeyton) was placed 3rd in Junior, giving him his qualifier for Crufts 2009. He won 1st in Maiden and 3rd in the Phalene class, a good day for Indy on his first outing to a breed club championship show.
Marnie (Abbeyton Some Like It Hot) got a 3rd in Post Graduate and VHC in Open, as the floor in the venue can sometimes be a little slippy I am always aware that Marnie being a jumper risks hurting herself, I have to keep her quite calm and this does not a very happy Marie make. So you can just imagine the hang dog expression she wore on the day. LOL
Flame (Northlyte Fire 'n Brimstone at Abbeyton) was with us and being handled by Angela went into the Phalene and Brood class where she got VHC in both classes. When Angela and Flame were at the ringside waiting to go into one of there classes Angela and Flame almost went flying by another exhibitor and her booted feet trying to be first in the ring with her own bitch. I suppose when your in competition some people just don't like to be held up on there way to the ring.
Hugo (Abbeyton Runnin Free) was a bit over awed by the whole event, but as his first show is going to be outdoors I expect it will be more to his liking.
Posted by Abbeyton Papillons & Phalenes at 6:26 pm No comments: