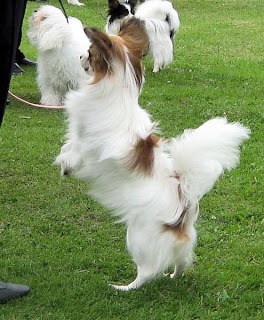 Well it could only be Ayla dancing with joy after winning 1st Papillon Puppy and best puppy in breed then winning 1st in the av toy special puppy class. Judge was Mr Tony Allcock (MBE) who judged the Toy group at Dundee premier show. Indy was placed a very respectable 3rd in Post graduate dog, shame the bitch in front was only a week or so out of season which meant he went round with his nose glued to the ground and when he stopped the grass was flying.
Posted by Abbeyton Papillons & Phalenes at 4:11 pm 1 comment:

Abbeyton and the word Papillons went so well together (well I thought so anyway) but as the title says changes are afoot.
My interest in showing Papillons started in 1995 when Jim my husband bought me my first Papillon called Poppy and ever since our lives and home has been taken over by these small dogs with HUGE characters and even bigger ears. lol I have enjoyed thoroughly being owned by Papillons over the years but I now find that we are being taken over by the Papillons ancestor and the original dog The Phalene, or Continental Toy Spaniel.
One of the first and most memorable Phalenes I ever saw was Serenglade Symphony bred and owned by Mrs Linda Greenslade when she won the Reserve Chalenge Certificate at crufts in 1992. (was there with some obedience folk long before I started showing) After that I became more aware of the occasional Phalene being shown and believe me they were few and far between. The next Phalene I met was a young dog imported into Scotland from Europe by Mrs Mary Fraser (Fraserdene)
Anyway fast forwarding to more recent history, Liz Anderson (Northlyte) had a Phalene, Northlyte Fire 'N Brimstone (Flame) a beautiful petite red and white girl who I was able to buy. It was almost a year later that I telephoned Linda Greenslade (Serenglade) who let me have my boy Serenglade Indigo Moon (Indy). From mating these two dogs I now have Abbeyton Fire Dancer (Ayla). And dare I say it that I recently went to visit Linda Greenslade with every intention of coming home with an absolutely gorgeous red sable Phalene dog puppy that she had sent me a photograph of but like all the best laid plans I came home with his litter sister. She is a black and white and her name is Daisy (Serenglade New Moon Rising) I was so tempted to bring back both of them (still tempted to go and ask Linda for the boy ) I had even phoned Jim and told him to expect both of them home, Jim was quite surprised only to have Daisy come in the door he went looking in the boxes for the boy as he didn't believe me that I had come away without him. LOL And so we now have four Phalene's and two Papillons!!!!!
Posted by Abbeyton Papillons & Phalenes at 8:33 am 2 comments: