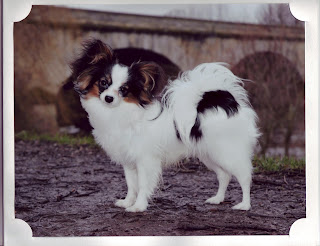 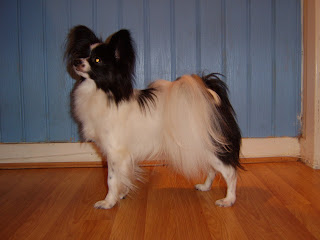 Abbeyton To Sweet To Kiss at Bonmeshay by special invite from the Scottish Kennel Club has qualified to attend the Scottish Open Show Dog / Pup of the Year competition.

The competition is open only to dogs residing in Scotland and who have won enough points at Scottish open shows to compete. Competition is fierce with some of Scotland's top dog in attendance.

We will be in Alva on the 11th February 2007 to support Anna and Tootsie.

Due to the terrible weather forecast Anna and I travelled to Stafford on Wednesday afternoon and stayed in a nearby Travel Lodge. Sue Deamer being unable to go asked if I would like to take Wills with me and show him. Of course I jumped at the chance to have him with us. And what fun company he was for Tootsie and Marnie.

Being our first championship show of the year it was nice to see dogs and people that we hadn't seen for some time. and of course to see the new puppies on there first outings.

Judge Liz Stannard had a very good entry of 167 Papillons.

Wills (Abbeyton Isle B Willin To Tri at Bankshill) was the first of our dogs in the ring and qualified for Crufts 2008 when placed 3rd in Puppy dog from an entry of 19.

Next was Marnie (Abbeyton Some Like It Hot) who got 2nd in Puppy bitch from an entry of 17.

Then in went Tootsie (Abbeyton To Sweet To Kiss at Bonmeshay) and from a very nice Junior bitch entry of 13 walked back out with reserve (4th).

The journey home was long and tiring due to the number of road closures etc because of the weather and HGV's being blown over by the strong winds. We were fortunate in that our normal four and a half hour journey took eight hours, I know that others driving home took so much longer.
Posted by Abbeyton Papillons & Phalenes at 11:54 am 1 comment:

Have one of those days where you knew you should have stayed at home?

Well I had one today, Marnie just didn't want to go in the car to go to the Falkirk show at Bathgate. Poppy (our oldie) kept us wakened most of the night with her coughing (heart and lung problems), so started the day tired.

Picked up Anna with Tootsie enroute and Tootsie was having a bit of a drama queen morning, nothing was just quite good enough for her.

Off we went both Anna and I yawning most of the way, Marnie munching bubbles (she doesn't get travel sick, she starts munching the moment she hears the car keys), Tootsie letting us know she knew when we were approaching each and every turn (blame the noise from the car indicators). Twenty mins into the journey we were turned back due to the road being closed by an accident, went through a few deep deep puddles on the farm roads we were diverted onto. I kept forgetting where we were going and almost ended up in Edinburgh.
Getting everything on the trolley was a bit of fun (wind and rain) and lo and behold the bungees had been taken out the car. Two dog boxes, two seats, two grooming kits, jackets and all our other essential (Huh) bits and bobs held in place by one bungee found in the depths of the boot.
Arrive inside looking very windswept and interesting (only ones interested were dogs).
Got our dogs ready far to soon to go in the ring, and they were bored by the time we went in the class. Marnie was placed third and Tootsie was fourth in the same class and second in the next one. Well done to Mrs Mac and everyone else who was there, sorry we didn't stay to watch the end but it was a nice to get home in time for lunch, haven't done it for a long long time. LOL
Posted by Abbeyton Papillons & Phalenes at 11:51 am No comments:

Abbeyton To Sweet To Kiss at Bonmeshay (Tootsie) won first in Papillon Open, Best of Breed and Group 3. Abbeyton To Sweet To Kiss at Bonmeshay and Anna today received official Kennel Club confirmation of Tootsies Junior Warrant Award and Stud Book Number.
Well done both of you.
From
Joan and all at Abbeyton xx
Posted by Abbeyton Papillons & Phalenes at 8:00 pm 1 comment: 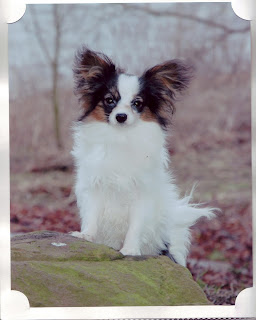 Not judged on the group system, Wills had to challenge all the other unbeaten puppies and won Reserve Best Puppy In Show.

Well done Sue and Wills from all at Abbeyton.
Posted by Abbeyton Papillons & Phalenes at 4:59 pm No comments:

Quite a difference in Papillon numbers at the show today.
Held in the Magnum Leisure centre (same venue as Kilmarnock show on Wednesday) there was an entry of three Papillons entered in the Open class for the breed.

Abbeyton Some Like It Hot (Marnie) was placed first, Abbeyton To Sweet To Kiss at Bonmeshay (Tootsie) was second and Abbeyton What's It All About (Alfie) third.

Marnie won the Best of Breed and in a very good Group was placed Group 3. She also won AV Toy Puppy and was Special Best Puppy in Group.

First show of the new year was held at the Magnum leisure centre today.

There was one class for Papillons at today's show, Tootsie was placed 2nd in a class of 6. Marnie and Alfie being the babies in the class went unplaced.

The AV toy puppy was won by a very nice Cavalier King Charles Spaniel, 2nd went to a very smart Maltese, Marnie was placed 3rd in front of the little Pom called Ritchie.

As the first show of the year Lena, Fiona (who own Sloughi's and Afghan hounds) and a few other people bring wine, home baking and invite everyone to enjoy. The meringues were lovely.
Posted by Abbeyton Papillons & Phalenes at 6:03 pm No comments: