A most enjoyable day

was spent stewarding at the Maltese Club of Scotland's open show in Gretna, right opposite the old Blacksmiths where I married my husband Jim 25 years ago. 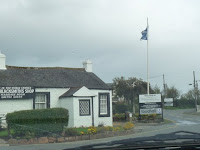 Some pictures from the day, courtesy of Brian and Carol Lees of Lafford Toydogs 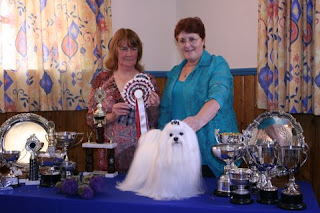 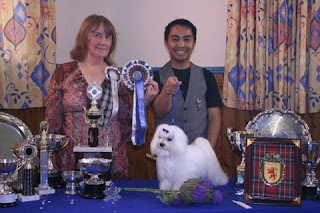 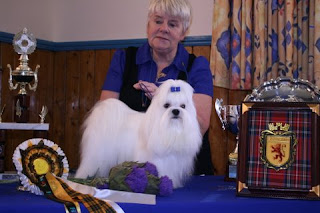 Had a bit of a busy weekend. Young Grace (phalene pup) who was staying with us for a few weeks went to her new Mum on Saturday to begin her trip to France to join her new human and doggy family. Though Grace was only small and here for a short time she has certainly left a big gap. But I dare say that the pups Jack, Jenni and Jessica will soon take up any convenient space left. lol.

Got home on Saturday evening about 7pm and had to load the car with the show trolley and all the other bits and bobs you take with you. Indy and Daisy then had to be bathed and all the other dogs tened to as well. With about an hours sleep I met Anna at 2am and we set off for Stranraer port for the ferry across the water to Belfast. As is usual when I travel I am so awake at the beginning of the journey that trying to have a sleep the same as most others on the ferry was impossible, but I did find others who were just as wide awake and we spent the two hour crossing talking about dogs.

This was Daisy's first time showing as she is only just 6 months. Not the most enjoyable day in her young life so far. She didn't mind at all the people who wanted to give her cuddles, or the dogs that quietly approached and wanted to say hello. The sound echoed round the hall we were in and this really unsettled her quite a bit. She was a wee star on the table and quite happy to let our judge Michael Quinney look at her teeth and go over her from head to toe without a fuss. Indy had what I can only describe as a really bad hair day, always remember to read the label before you put conditioner on your dog the night before a show, lol used the wrong one on him and he came out of his bed looking like he had joined a punk rock band!!!!!!!! all I can say is thank you Gordon Urquhart of HUB who very kindly took time to advise the best "approved water" to help control Indy's impression of a burst cushion. Doesn't help that his coat is at different lengths just now as well.

Indy stepped out in the ring looking decidedly better than he did when he came off the boat and took a 2nd in the Post Graduate class. Daisy came 3rd in Puppy. This gave both of them a qualifying place for Crufts 2010. Looks like it is going to be a Phalene only trip to Crufts which is a first for us and certainly something to look forward to.

The journey home was the same as every other show except you got out the car for a couple of hours to stretch your legs. Again most of the bench seating on the ferry was taken up with people stretched out trying to get a couple of hours sleep before starting the drive home, some longer than others. I wasn't able to sleep on the ferry so spent the crossing talking dogs. Whats new there then lol.
Posted by Abbeyton Papillons & Phalenes at 10:14 am No comments: