Turn a show weekend from one you want to forget to one to remember.
Went to Driffield show on Saturday with Anna, Angela and their dogs. Our judge to day was Mr Howard Ogden (Beauview). Travelled there at a leisurely speed as I thought wrongly that Shadow was so grown up and old enough to be in the Puppy dog class, and was I wrong. I stood at the ringside with Shadow in my arms and watched Minor Puppy Dog being judged, even applauded the winners!!!!! When the steward called for the dogs for Puppy dog in went Shadow and I only for the steward to check her catalogue and tell me we were in the previous class. Nobody's fault but mine.
Note to me:- Check the catalogue when you arrive don't assume it's as you think.
Any way still kicking myself very hard Anna and I were both entered in the Junior dog class, Anna won 2nd place with Ruben (Northlyte Timeless At Bonmeshay) and I had Wills (Abbeyton Isle B Willin To Tri At Bankshill) who won 1st place. Angela who travelled with us was in the Open Dog class with her dog Logan (Pamhurst Whisper At Adnamashan) who was placed a very respectable 5th in a well turned out class. 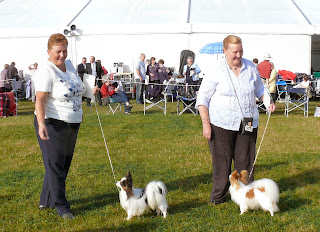 Next up was the girls, Marnie was in Junior Bitch for the last time at a champ show as she will be 18 months on the 27th September. Any way she was her usual self racing to get from one end of the ring to the other and when she should have been standing still she just had to let everyone see how high she could jump without the aid of a trampoline!!!!! Marnie was placed 3rd from a very nice class of bitches.

Anna and Angela were both next in Post Graduate Bitch. Anna with Tootsie (Abbeyton To Sweet To Kiss At Bonmeshay JW) and Angela with Serena (Adnamshan Serenity) who won 1st in the class and Tootsie was unplaced.

Judging finished quite early in the afternoon so we took a walk round the stalls and then settled ourselves at the benching with absolutely delicious fish and chips for lunch. It was really nice, the sun was shining and people were stopping for a chat. After lunch it was time to pack up and head home as we all had other things planned for the Sunday.

Angela was going to her Grandsons christening (her first one) and Anna and I were both going to Scottish Toydog Society open show at Bonnybridge near Falkirk.

This is where having a KRAFT day can turn the next day to absolute delight.

At Scottish Toydog show Shadow came 2nd to Ruben who won the Papillon Junior dog class under judge Wendy Wilson (Adinaken). Marnie was in Papillon Junior Bitch which she won under Judge Linda Cummins who also gave a 1st in Papillon Open Bitch to Flame.

Ruben won Best Dog and Flame won Best Bitch, both judges then had to agree on there Best of Breed which went to Ruben.

After a long wait judge Mrs Margaret Boulcott (Ingerdorm) declared Anna and Ruben BEST IN SHOW and what a moment that was for Anna and Gillian (Anna's daughter) the applause started as the judge walked towards Anna and Ruben and continued till Anna left the ring to go home, it was a wonderful moment in which everyone hugged, kissed, shook hands patted backs and wiped there eyes. Many of us are lucky enough to have Anna as a friend and knowing the person she is and the ups and downs life has thrown at her lately, what a joy to hear that when visiting her husband Jack in hospital he to had good news that he was being allowed home in the next few days. So an all round good news day.

Well done Anna, Gillian and Ruben from all at ABBEYTON.

sorry about shadow missing his turn at the show, but what a nice ending to the weekend. well done Pat xx