My weekend started Friday afternoon when with Anna I went to Dumfries to deliver Marco to his new owner Catriona, her husband Craig and there two daughters. Marco is starting his new life with the new pet name of COSMO, though he will be in the show catalogues as Abbeyton Here We Go Again. I know that I will see Cosmo at the shows or as Catriona said I could go visit as often as I liked, it still didn't make it easy to walk away and leave him behind. But I know that Cosmo will be loved and cared for, just as Craig said when I phoned on Saturday morning Cosmo has only to raise his little paw or bat an eye and his every whim is met. LOL And no matter how much I tried to persuade Catriona she wouldn't let Cosmo come back to me, he was now her boy.
Saturday I spent with Hugo and Amber who were missing there playmate, so they received some extra treats and loads of cuddles.
Sunday was a heart breaker of a day. Anna who has been my rock during the weekend again went with me, this time to Edinburgh and again supplied me with tissues on the drive. Amber was going to join Maureen and Len, her new family. On a number of occasion's I pulled into a lay by or services, and as Anna said I couldn't keep putting it off I was gong to get there sooner or later and unless I actually turned the car around it was inevitable. I phoned Maureen at one stop and asked her if she still really wanted me to come up with her pup, she said of course she did, both she and Len were on the edge of there seats waiting for us to arrive. The picture below shows just how well settled little Amber was last night in her new home. Flame and Indy made the journey with us to Edinburgh and when we arrived they made themselves quite at home along with Amber and enjoyed exploring the new house and garden that was to become Amber's home. 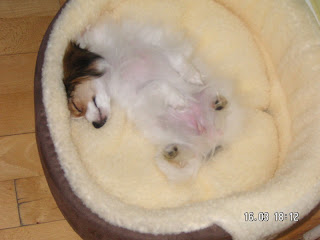