What a busy weekend we had all the dogs spent the day at home with Jim while I went to Scottish Kennel Club and stewarded for the judges of Pyrenean Mountain Dogs, Australian Cattle Dogs and Polish Lowland Dogs. The entry for each breed was quite low and the judges quite efficient so I got home about 5pm giving me plenty of time to bath the dogs for the Clubshow the following day.
Joe arrived with Aflie at 6.30am and we set off to collect Anna and Ruben. We arrived at the venue in Lanark in plenty of time for setting up the ring, grooming area etc. As this was our first time using this venue for the club we had a few teething problems which were quickly ironed out with the help of the Scottish Pomeranian Club committee with whom the Scottish Papillon Club were sharing the venue. Judging for the Poms started at 10am and the Papillons at 10.30am. First in the ring from amongst our travelling companions was Anna with Ruben (Northlyte Timeless) who won 1st Puppy Dog. 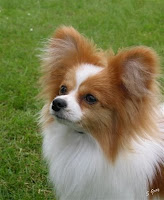 Next up was Joe and Alfie (Abbeyton What's It All About) who also 1st in won Junior Dog.

My first dog in the ring was Marnie (Abbeyton Some Like It Hot) who went 2nd in Junior Bitch, being beaten by the bitch which won the CC and reserve best in show. Flame was entered for two classes her first being Open Bitch where she was place 2nd. This was enough for her to get her Stud Book Number, she then went 2nd in the Special Phalene dog/bitch class. There was no stopping either of the girls, they both went really well. Marnie was called in to be considered for the Reserve Bitch CC, but the judge gave it to the Limit class winner. Anna with Ruben and Joe with Alfie had to go in the ring to compete in the challenge for the dog cc. Boy it was hard on the heart standing at the side watching. Dog Challenge Certificate went to Joe with ABBEYTON WHAT'S IT ALL ABOUT (Alfie), I don't know how Joe was feeling, but I know that I must have deafened the exhibitors standing around me when I started screaming. What a great achievement for them. At only his third championship show (one of them crufts) Joe and Alfie won the Dog CC. After the Bitch CC was awarded they had to go in the ring again for the judge to decide who was Best of Breed and Best In Show, at this point I was talking to Sue (Bankshill) on the phone telling her the news (her boy Lewis is the sire of Alfie) I think it will take a few months for her hearing to get back to normal as I screamed in her ear that JOE & SUSAN'S ABBEYTON WHAT'S IT ALL ABOUT had just won BoB and BEST IN SHOW.

As we left the show we were caught in a downpour of rain and had to get everything in the car as quick as possible so as you can imagine when we left the venue at 6pm we were all tired absolutely elated, soaked to the skin!!!!!!! and no one gave a damn.
Must make a comment about the show itself, the venue was nice and bright with loads of natural daylight coming in from roof. Myself and Francis from the Pom club joined forces in our attempt to get the exhibitors to part with another pound or two for the very large raffle that so many people had donated to. And what a great time I had in my other "pastime" talking, everyone was really cheery (OK not everyone but most) and everyone seemed to think that the sharing of the venue was a great idea, shame the chef didn't make enough caramel apple cake to go round everyone for lunch LOL and thank you to Malcolm who was celebrating his sixtieth birthday for my glass of wine and piece cake, it was really tasty. Also a mention to Adam our new committee member and his new Papillon Spellbinder at Amicea (Leo) who made there debut in the ring today, you were both very smart and really worked well together. Good luck for the future.
Posted by Abbeyton Papillons & Phalenes at 5:57 pm